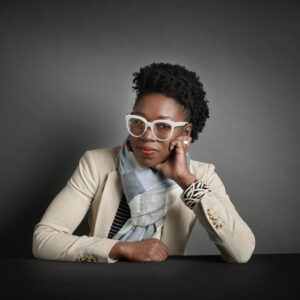 Dr. Joy Buolamwini is a computer scientist, poet of code, and model who uses art and research to illuminate the social implications of artificial intelligence. She founded the Algorithmic Justice League to create a world with more equitable and accountable technology. Her TED Featured Talk on algorithmic bias has over 1.4 million views. Her MIT thesis methodology uncovered large racial and gender bias in AI services from companies like Microsoft, IBM, and Amazon. In 2020, these companies stepped back from selling facial recognition technology to law enforcement. In addition to advising elected officials during US congressional hearings, she serves on the Global Tech Panel to advise world leaders and executives on reducing AI harms. As a public scholar, she has written op-ed for the New York Times, Time Magazine, and the Atlantic. The latter contributed to  a successful  multi-organization campaign to push  the U.S. International Revenue Service to abandon the use of facial recognition to govern access to basic  government services.  Her scholarly work introduced the intersectional phenotypic and demographic analysis to computer vision research  and the concepts of the coded gaze, evocative audits, and counter-demos that demolish assumptions about my supposedly benign technology by demonstrating real-world harm. Her art is featured in museums and art exhibitions across four continents. Her journey from graduate student to fighter for algorithmic justice is portrayed in the critically acclaimed documentary Coded Bias available on Netflix. The King Center honored her with the 2022 Beloved Community Technological Innovation award.

Joy Buolamwini served on the Steering Committee that informed the creation of the Just Tech Fellowship.